Pigs DO Fly: Three Lessons Adults Can Learn From Teenagers 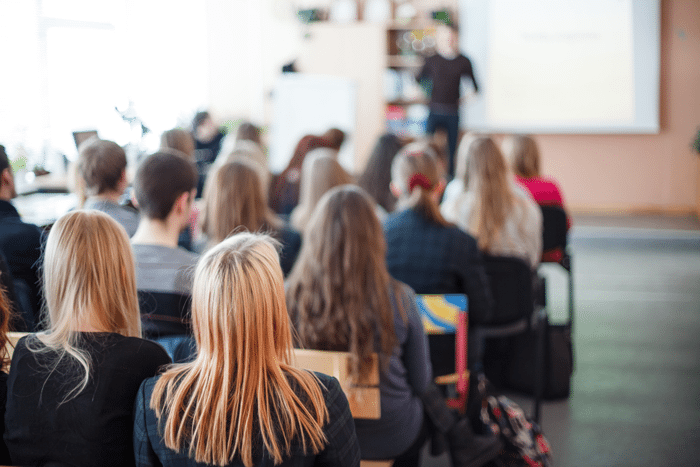 Most people wish they could forget their teenage years. Made up of braces, frizzy hair and embarrassing memories, unfortunately most of the cliché high school troubles are all too true.

As a High School teacher, I had a bird’s eye view of this simultaneously difficult and hilarious time in life. Now a few years out of the teaching game, I can look back and reminisce a little more fondly on the students I taught and the experience I had. I will be forever in awe of the curiosity, resilience and quirkiness my students demonstrated. The amazing kids I taught were by far my favorite part of teaching and they left me with lessons that are applicable to any adult’s life.

Nothing surpasses the confidence exuded by a high school boy. Whether they are secretly shy or not, when they are around their friends something comes over them and all barriers are broken down. Inappropriate comment to say in front of a teacher? Who cares! Life is short. One of my favorite funny memories was during my first year of teaching at a Catholic school. We were going to have a Priest come in and speak to the class, and being an overprotective first year teacher, I wanted to prep some questions for him.

The students had standard questions that I honestly can’t even remember, and then one goofball raised his hand and said, “Can I ask if he’s ever been to Sammies?” Being new to the area I assumed “Sammies” was a sandwich shop. So, my response was something along the lines of, “Uh, that doesn’t really have anything to do with being a Priest, but ok.” That’s reasonable, right? Well I was wrong. Sammies is a Gentleman’s Club in a sketchy part of Pensacola. After a big load of giggles I realized the question was not what I thought it was and quickly changed the subject. Inappropriate? Definitely. BOLD? Definitely. I’m obviously not suggesting that you say outlandish comments just for the sake of a good laugh, but his overwhelming confidence made him one of my favorite students and is an attribute I still try to embody.

Another more positive experience with confidence (wasn’t going to share that previous story with my advisor…) was a student in my second year who was always willing to try no matter what. To have a good English class, students need to participate and you can only imagine how easy (read: terribly impossible) it is to get teenagers to talk about literature. This student, a bubbly, talkative, energetic girl, sat right in the middle of the classroom and was my saving grace. Even though she probably wasn’t the smartest kid in the room, she was willing to take a risk and speak her mind. Often she came up with ideas that I never would have thought of, but in their oddity, they were so brilliant. In a future team meeting it could be worth it to share your risky ideas, you may just be rewarded with an A+ (or a bonus).

The limit does not exist

I would argue that teenagers have the biggest dreams. Sure, kindergarteners all want to be fire(wo)men, but teenagers are old enough to really, seriously think that is a realistic goal. Which is awesome.

During my second year I wanted to focus on getting to know the students as humans. One of the exercises we did was a “six word memoir.” Basically, I asked them to write a statement that defined them in six words. Two of my favorites were, “Pigs do fly in my eyes” and “I wear capes in my dreams.” These are 16-year-olds, people.

The kids that wrote those two weren’t the smartest, most athletic or best looking people in the room, but they had a strong belief that anything was possible. There is no reason to think you cannot achieve a PR or dominate that Flywheel class; to a teenager anything is possible, and us jaded adults should start to believe that, too.

We’ve all had bad days. Whether you accidentally snooze too many times, send out a wrong email at work or feel exhausted in your workout, some days you just don’t feel like a rockstar. On those days it is easy to not smile at the Chipotle worker or to freak out at your Mom for never answering her phone.

The biggest lesson I learned when dealing with 100 crazy teen minds was that I had no control over their bad days, and that sometimes I was the Mom getting the brunt of the negative energy. At first this really hit me hard; I wanted them to motivated and excited to be in class. But regardless of my effort, there were times when the kids just weren’t having it.

One particular day I was over it all and there was a student who was, to put it simply, being a jerk. Every time he didn’t participate in class I got more down on myself; so much so that as soon as the bell rang I scampered out of the classroom to go cry. Note: I am not a big crier – no tears come out for romantic comedies, engagements, weddings, so when I do cry it is ugly (I mean actually ugly, I look terrible afterwards). Thankfully after that class I had office duty, so I was hiccupping/sobbing/gasping for air in a little back closet while I processed absent excuse notes. The wonderful secretary heard me, knocked on the door and said, “Oh, honey, did your boyfriend break-up with you?”

Through an explosion of tears I tried to explain the situation but really struggled because it was so ridiculous. That particular student’s attitude was not a reflection of my teaching ability or who I was as a person; he was having a bad day that my kickass lesson could not change.

Sometimes people at work won’t support you 100%, but that shouldn’t keep you from fulfilling your goals. A good cry might help, but exceeding other’s expectations is even better!